The Campaign to get a statue of D.H. Lawrence for his birthplace at Eastwood, Nottinghamshire.

Thanks to the D.H. Lawrence Society for passing these details on to their members.

Eastwood, Nottinghamshire, is the birthplace of D.H. Lawrence, and has a museum dedicated to him in the house where he was born, but Eastwood doesn't have a statue of him, we hope to change that with your help.

People from all over the world have visited D.H. Lawrence's birthplace at Eastwood, including relatives of both D.H. Lawrence, and his wife, Freida Von Richtofen.

A number of notable writers, artists, and playwrights have also visited, and Eastwood has been the location for two major films, televised dramas and documentaries. We think it is time that Eastwood had a statue of D.H. Lawrence to boast about, a statue that can be seen, and photographed by everyone who visits, which in turn will spread the word about D.H. Lawrence, and Eastwood, helping to bring in more visitors to the area to view our new statue, and help the economy of our struggling town.

This is a collection of ideas to see what the people of Eastwood, and possibly around the World, would like to see if an often called for statue of D.H. Lawrence is to be created, and later erected in Eastwood. What would be ideal is if a very rich fan of D.H. Lawrence would pay for the statue, but if that is not possible, several less rich people to join together and help us with the funding, the estimated cost being in the region of £40,000.

Some suggestions so far have been to have D.H. Lawrence sitting by a tree writing notes, or reading a book. Another great suggestion is to have Lawrence sitting on a bench, or perhaps a low wall, reading a book, so visitors can sit beside him, and have their photographs taken with him. Discussions involving over a 150 members of the 'Eastwood and Kimberley Bygones' Facebook group have taken place, and the majority view is to have an interactive statue with Lawrence sitting on a bench, but thoughts about whether Lawrence should be depicted with or without a beard seem to be evenly balanced. If Lawrence was depicted looking younger, with a moustache, it would be more in keeping with how he would have looked at the time he left Eastwood, but depicting him with his trademark beard would make him easier for tourists and visitors to relate to, possibly making them more willing to have their pictures taken with him, so for that reason I think I would prefer the beard.


Below is an example that could be used of D.H. Lawrence sitting on a bench, in a typical pose, just to give an idea of what a similar statue of Lawrence could look like. 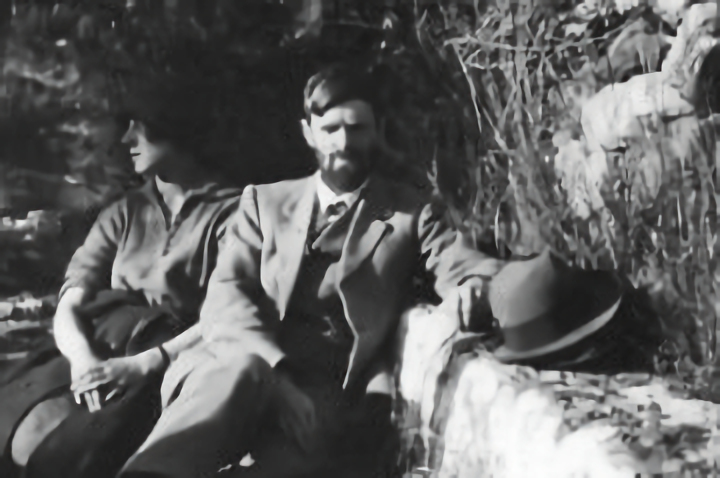 Broxtowe Borough Council has now announced on Notts TV their intention to provide a life size statue of D.H. Lawrence for Eastwood, after receiving £25,000 of outside investment to help fund the project. Councilor Milan Radulovic, leader of Broxtowe Borough Council, commented that the town needs to thrive as a tourist destination. Milan Radulovic also announced Broxtowe Borough Council is in the process of submitting a 20 million pounds application to the Government's 'Levelling Up' fund, which supports town centres with extra cash, but says that if the Council do not get that extra funding, they are still looking to go ahead with the D.H. Lawrence statue project.

My personal view about this.

It doesn't really matter to me who funds the statue of D.H. Lawrence for Eastwood, the important thing is that we get the statue, so I welcome the announcement from Broxtowe Borough Council, but I also hope they take into consideration the views from those 150 or so people that made comments and suggestions on the Eastwood and Kimberley Bygones Facebook page, and that Broxtowe Council also consider Andrew Lilley as the sculptor of the project. Andrew, who was the sculptor of the magnificent Irena Sendler statue for Newark, has been very helpful in the campaign for a statue, and has told me that he would still love to create the statue of D.H. Lawrence for Eastwood, and work with Broxtowe Borough Council.

Further details about Andrew Lilley, and his statue of Irena Sendler, are included below.

Andrew Lilley is the sculptor who designed and sculptured the very impressive life size bronze statue of Irena Sendler, the Polish woman who saved over 2,500 Jewish children's lives by smuggling them out of the Warsaw ghettos during the Nazi occupation of Poland during the Second World War. Irena Sendler's statue was recently unveiled in Newark in June, 2021. The picture of the statue, below, was taken from outside the studio before being transported to Newark. Copyright-Andrew Lilley. 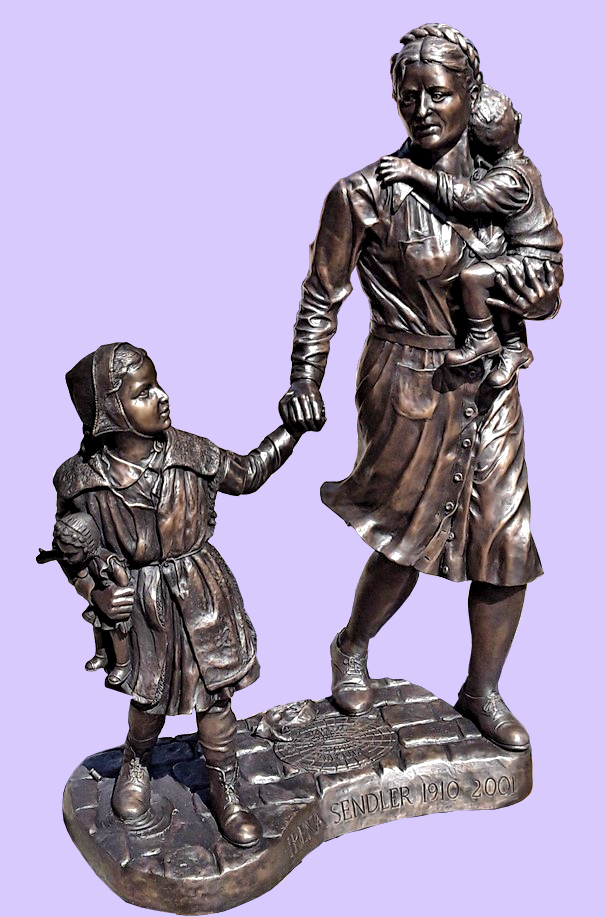 After reading about, and seeing, what Andrew has achieved with the Irena Sendler statue, I got in touch with him, and he has said that he would be very happy to design and sculpt the D.H. Lawrence statue for the people of Eastwood. Below is a draft compositional sketch that Andrew has kindly supplied, and shows how the statue might look based on earlier comments and suggestions from supporters. This particular sketch shows Lawrence in his younger days, which has been suggested as being more related to how he would have looked around the time that he left Eastwood, but others have said that it would be better with his trademark beard, no decision has been made on this yet. Andrew does stress that this draft sketch is not intended to be photographically accurate but of 'design intent only'.

Andrew also says that this sketch depicts DH Lawrence sitting on a bench reading a book when a friend approaches to speak to him. Lawrence puts the book down on the bench, using his thumb under the book as a bookmark, to speak to the friend. This could also apply if someone had approached Lawrence and asked if they could take a photograph of him, or have their photograph taken beside him on the bench, making the statue interactive with visitors or tourists coming to Eastwood. 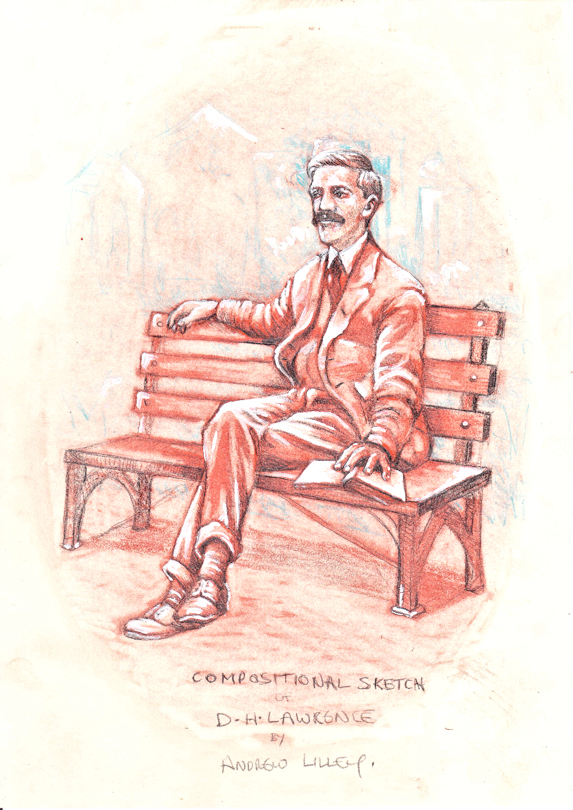 An estimated cost of a life size bronze statue.

A site in Eastwood to put the statue on. (see below).

A possible site for the statue of D.H. Lawrence, in front of Eastwood Library?

In my opinion, this would provide the perfect location for the D.H. Lawrence statue, with the statue sited near to, or replacing, the tree in the centre, (see the image below). Some people have expressed concerns that positioning the statue there might mean the removal of a tree, but that tree could be replanted to the left of the patio, if possible, or if not, another tree could be planted to the left of the patio in its place. The reason for this is that the statue of D.H. Lawrence would then be directly overlooking the phoenix patio area in front of him, creating an amazing visitor's attraction for many years to come. The land to the front of Eastwood Library is probably owned by the people of Eastwood, under the control of the Council, so placing the statue there would keep costs to a minimum as no land would need to be purchased for the statue.

That phoenix patio area is sometimes used as a stage for entertainment purposes, which is what makes having the statue directly behind it so appealing. It would also have the advantage that people taking photographs of any entertainment provided on that patio would possibly have the D.H. Lawrence statue in the background, further promoting Eastwood, and D.H. Lawrence, when those photographs are shared on social media. If the suggestion of a bench, with Lawrence sitting on it, was adopted for the statue, that would provide a lot more photo opportunities. 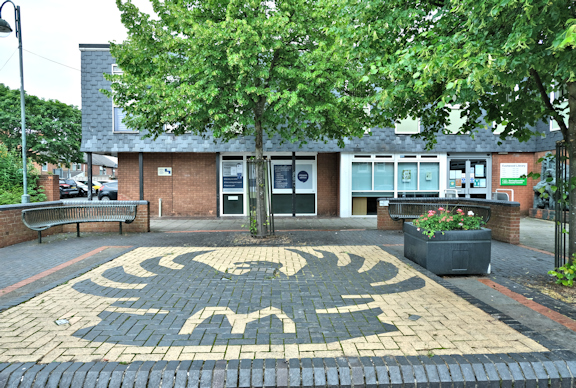 My name is Gavin Gillespie.
I can be contacted via email using the link below.
Contact Gavin

Sponsors of the D.H. Lawrence Statue for Eastwood

Main sponsors will be listed here, (if agreeable).

The D.H. Lawrence Statue situated on the Nottingham University Campus 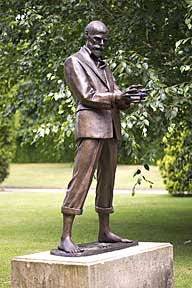 Further details about D.H. Lawrence, and Eastwood, are available using the buttons below.