This first poem, Billy Hall's Pit, is a poem I wrote in the early 1980's. It is about a local colliery which closed down many years ago, in 1959. The colliery was officially known as Lodge Colliery, but was called Billy Hall's pit by the men that worked there, William Hall being the name of the original owner of the mine. The colliery was situated at the side of a railway line, which was later used as the Eastwood and Kimberley by-pass.

The original pit tip can be seen at the left of the second picture below the poem. For those that do not know what a pit tip is, it is a high mound, or hill, made up from the waste material that had been extracted with the coal mine along with the coal.

Walking along the new by-pass,
Remembering how it used to be.
This stretch of tarmac, fringed with grass,
Countryside bisected, letting traffic run free.

Under that grass, the last remains,
Of buildings flattened long ago.
A railway sleeper, suggesting trains,
But what stood here? Yes now I know.

This was the coal wharf for Billy Hall's pit,
And over there, the shaft now filled.
Where miners used to squat or sit,
Awaiting the cage, their bodies chilled.

The biting winds across the fields,
Dispersing smoke from a last Woodbine.
The cold highlighting the scars and weals,
Tattooed with coal dust from the mine.

Just up the road the pit tip stood,
Smouldering away without a sound.
Sweating, like the bodies supplying its food,
Working hundreds of feet below the ground.

Once a monument to those maimed or killed,
Now spread as hard-core, a few yards away.
A gigantic monster, finally tamed,
Now back below ground, good riddance some say.

It's still hard to imagine this once busy lane,
Filled with the miners homeward bound.
Tortured bodies, not showing the pain,
And stress, of years working underground.

Their wives sitting waiting, watching the clock,
Dreading the thought that a stranger might call.
In the back of their minds, half expecting the knock,
And "I'm sorry Missis, there has been a roof fall"

This lane once lined with orchards,
And wildlife abundant.
Now seems so desolate,
Like the miners - redundant.

All that remains is an overgrown path,
No Billy Hall's pit, and no railway track.
Nostalgia's OK if you forget the bad times,
Perhaps it is better, not to look back.


This second poem, 'Moorgreen Show', was written in 1982. It is an amusing look at a local agricultural show, and what many people seemed to think of it. I returned to the show in 2001, and it was much better, some photos from the 2001 show can be seen on my images page. Unfortunately, the show has now been discontinued.

How many times have I said before,
Enough is enough, I will go no more.
But wait, the advance publicity said,
Do not by previous years be misled.
This year will be better, wait and see,
With something for all the family.
So off we trot, or is it canter,
To enjoy ourselves in carefree banter.

First the car park, easily found,
Only half a mile from the ground.
And if you have not got a coloured pass,
It's one pound to rent twelve feet of grass.
When to the gate you finally creep,
The sign above proclaims dig deep.
It is two pounds to enter this hallowed ground,
And this, on top of the parking pound.

Then in you go, anticipating,
The joys and sights that are awaiting.
Before you've reached the second fence,
You've bought a programme, eighty pence.
Now you know just what's in store,
Is this the programme from the year before?
It looks the same inside the cover,
Show jumping, dog show, best bullock and mother.

Around the ground to see the rest,
A quick tour first to find the best.
Two hundred smiling salesmen cry,
"Our double glazing is the best to buy".
So around again, watching cattle grazing,
Dodging the cow dung, and more double glazing.
Perhaps next year will come to pass,
The introduction of a special class.

A class for salesmen to find the best,
To be led round the field, suits neatly pressed.
Wouldn't it be lovely to give them abuse,
Keep them parading, as they enthuse.
About their wares that no one buys,
Whilst telling us a pack of lies.
Wait a minute, there's a tent selling beer,
Perhaps I might come back next year.

The St. Johns Ambulance Brigade in action at Moorgreen Show. 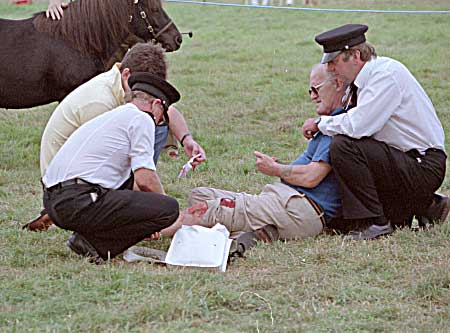 For those that believe people join the St. John's just to gain free admission to events, witness the S.J.A.B. in action at Moorgreen Show. The two St. John's officers are Brian Rollinson, and Bill Wilde, (friends of mine), and the amusing thing is that this is the first real patient they had treated in 30 years, and it was captured on film. The unfortunate patient had been kicked by a pony, seen smiling in the background.


The third poem, 'How Green Was This Valley ?', was written to express my views on Decathlon's proposal to build on greenbelt land, just off of the A610 at Giltbrook,. The proposed greenbelt site was on the opposite side of the by-pass to their present store, and the existing Ikea store.

We have lost too much of the countryside surrounding Giltbrook already, it is time to say no to any more. It is ludicrous for Decathlon to suggest building another store, with surrounding restaurants, and a so called recreational facility, on greenbelt land that already acts as a recreational facility. This is just an excuse to encroach into the greenbelt, knowing that it will then make further retail development much easier to achieve.

This poem is set 40 years in the future, with a young lad out walking with his granddad.

How green was this valley?

What was here before, granddad?
Before Decathlon came?
Was there birds and butterflies,
Like other people claim?
Or has it always been like this,
With cars on tarmac standing,
From Kimberley to Langley Mill,
Surrounding neon branding?

Was this once a valley granddad?
Was it green with grass?
Was it beautiful long ago?
Why did they make it crass?
Was there a river meandering through,
Beside a railway track?
Why did they let them change it?
They can never get it back.

He roamed the fields, searching for beauty,
Whilst escaping from the grime,
Being born into a hostile world,
Fifty years before his time.

He did not fit in, he did not care,
Escape always on his mind,
To change the world at any cost,
To re-educate all mankind.

Wandering far, and wandering wide,
Forever struggling along the way,
Some words he wrote, no one dared quote,
His blue skies were turning grey.

The constant fight against ill health,
Never once did sway his mission,
But in the end, the ill health won,
And curtailed his life's ambition.

It took thirty years from Lawrence's death,
For society to accept,
That his words in books, expressing love,
Were not boundaries to be kept.

Fifty years before his time,
Leaves a question answered how?
If Lawrence was alive today,
What would he be writing now?